How to raise your visibility in your career 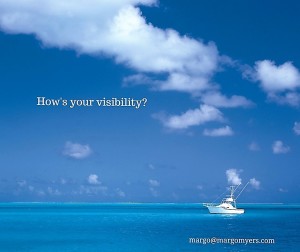 Is your fear of being visible holding you back in your career?

One of my clients recently talked about his need to ‘raise his visibility’ at work. He’s hard-working, has a measure of success in his field, and appears to be well-liked by his team. And yet, he seems to be practically invisible to his supervisor and his supervisor’s boss. I asked him what he makes of that? (Long pause). And he told me that until now, he was “comfortable” being invisible. He didn’t draw attention to himself, did his work, and collected his salary.

What changed? He was passed over for promotion, again. For about the third or fourth time. And he was starting to realize that being invisible, while comfortable, wasn’t doing his career – or his paycheck – any favors.

How many of us are comfortable doing our job, but NOT going out of our way to let anyone know about our successes? Our wins? Or communicate the ways in which we support our team so that others in our group can also be successful?

The Merriam-Webster Dictionary defines ‘visible’ as ‘able to be seen,’ ‘easily seen or understood,’ or ‘known to or noticed by the public.’

What’s the fear in being visible?

Here’s what my client said (mostly fear-based to begin with):

And then, another long pause. And he continued with an obvious shift in his thinking:

I asked him about ways he could start raising his visibility at work. Serendipitously, he was leading a meeting the next day with the company leaders about a troubled account he had managed to turn around. We started with the outcome he wanted for the meeting. What results did he want? The results focused on his efforts to confidently lead this account, and show how he had managed to persuade the client to increase the budget at a time his boss thought that would be impossible. And then we planned each step of the meeting with those results in mind. At our next coaching session, he was amazed at how well it went, and the positive response he received from his boss. It’s a first step! And it will get easier with practice.

It’s not always easy to choose visibility. As a former TV news anchor, I have some experience with that. It takes belief in yourself and your abilities. I didn’t start out as an anchor in a large market. I worked my way up, starting out as a reporter in much smaller TV markets (where there’s less visibility if you make a mistake), and working my way into larger cities, gaining more anchoring experience along the way. As my experience grew, so did my confidence, and my visibility.

Consider YOUR visibility. Is my client’s story your story, too? What’s one small step you can take today to increase your visibility?

If you feel invisible in your role, let’s talk. Just click here.

youtube.com/c/MargoMyers206
Do NOT follow this link or you will be banned from the site! wpDiscuz
0
0
Would love your thoughts, please comment.x
()
x
| Reply