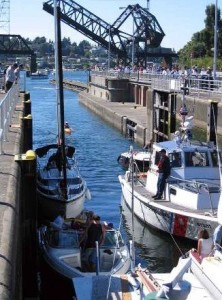 Ballard Locks. Talk about a gorgeous night at the Hiram Chittenden Locks, better known as the Ballard Locks. We just took a quick trip there to check it out on a beautiful night. Perfect weather, lots of bicyclists (walking their bicycles through the gardens), foreign tourists from Germany and France if the languages are any indication, a lot of dog walkers, kids and yes, even salmon going through the fish ladder.

Time for Sockeye. We spotted at least one big school of sockeye swimming in front of the dam at the locks, trying to get through the fish ladder. Once inside at the viewing ladder, there were dozens of sockeye going through — the most I’ve seen in some time. A good-sized crowd was on hand to see them migrate from Puget Sound, into Lake Union, and then to Lake Washington and the Cedar River near Renton to spawn and die.

In fact,the Seattle Times reports that fish counters from the state, along with the Muckleshoot Indian Tribe are down at the underground viewing windows at the Locks every day from mid-June through July, monitoring the peak of the run.

The Times reports that 40,000 fish have already made their way through the Locks on their way to Lake Washington, but that’s not enough to open recreational fishing. There needs to be at least 350,000 fish to have been counted, and that hasn’t happened since 2006.

One lonely sea lion. We spotted what I thought was a seal, but my husband swears was a sea lion that had somehow made it through into the big locks. Of course, where there are salmon, you’ll find a hungry sea lion lying in wait for dinner.

Few boats, but just wait. Only a few boats were passing through the small locks this evening, but it’s always fun to watch, to see if any boaters will have any mishaps. Having gone through the locks dozens of times, it’s kind of like being in a ‘fish bowl’ with everyone watching your every move. No mishaps or dented boats tonight, but with the hot weather coming, you can bet the Locks will be getting busy, and the Lock attendants will have plenty of stories to tell. All in all, it was a perfect night for the best free show in Seattle.