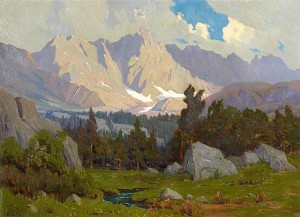 Impressions of California. I’m a big fan of impressionist art, and have been since I was introduced to it in one of my college honors classes at WSU. Living and working in California for about a 10 year period, I came to appreciate the ‘plein air’ painters who captured the light and scenes of California — from the Central Coast near Monterey and Carmel, to Laguna Beach in the south.

Older artwork. I especially enjoy the Early California Impressionists — such as Guy Rose, Elmer Wachtel, Edgar Payne, Paul Grimm and William Wendt. They portray scenes of California when it was still undeveloped, and do a beautiful job of putting paint to canvas to show the ocean waves, the high Sierra, the rolling hills or old, authentic California missions untouched by houses and freeways. Irvine Museum. My husband and I recently visited the Irvine Museum, located only a couple of block from John Wayne Airport in Orange County. It’s small, and is located on the ground floor of an office tower in Irvine. Joan Irvine Smith started collecting California Impressionist art almost 20 years ago, and the markets since then have skyrocketed. The museum just debuted a new exhibit called “Saving Paradise.” It features dramatic landscapes that make California so special. In fact, we stopped at the Redfern Gallery in Laguna Beach just to take a look around, and learned that Irvine Smith bought some of her first artwork from this gallery. We also stopped in to admire paintings at the Wendt and Bluebird Galleries.

Not quite Manet or Monet. I just saw where a self-portrait of Eduoard Manet sold for more than $33 million. These paintings aren’t quite in that price range, but still cost thousands of dollars. For now, I’ll have to settle for visiting the galleries and the Irvine Museum. 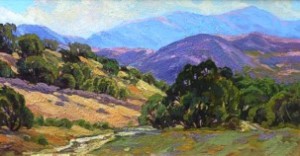