A Great Year — No doubt 2009 will be remembered as a great year for the Washington wine industry. First, Wine Spectator named Columbia Crest Reserve Cabernet Sauvignon 2005 its “Wine of the Year” ranking it #1 in the world, with a rating of 95. It’s the first time in history that a Washington wine has been named ‘number one’ in the 21 year history of the annual ranking, and the judges went through 17,000 wines before giving the nod to Columbia Crest.  Then, Wine Enthusiast named Chateau Ste. Michelle CEO Ted Baseler it’s “Person of the Year” for his work on behalf of the wine industry. 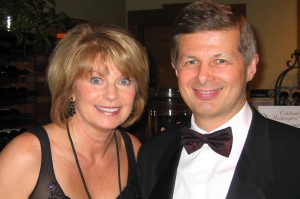 Those associated with the Washington wine industry have known that we produce world-class grapes and world-class wines, and now the rest of the world knows it, too. Baseler says the Wine Spectator award has changed the perception of Washington wines, “literally overnight.” And he says the awards are “validation” of our state’s wine industry and the top quality wines we produce.

Celebrate Washington Wine auction — The January 30th auction to benefit Washington State University’s Viticulture and Enology program was a sellout!! Some 200 guests in ‘black tie’ descended on Chateau Ste. Michelle on a drizzly night to celebrate the great gains made in Washington’s wine industry, and they ‘bid wildly’ on everything from fabulous trips, such as an African safari, to collections of top Washington wines, to special winemaker dinners. It’s all to raise money for what WSU is aiming to make into a top flight program in vineyard management and the art of winemaking. In fact, WSU’s program has a new director in Dr. Thomas Henick-Kling. He’s low-key in person, but has big plans for the program with the goal of nurturing young talent and keeping them here in Washington to advance both the science and art of great wine.
Giving Credit — Kudos go to Nancy Harnasch, the event chair, and her great team of volunteers for a terrific evening! A lot of hard work is needed to make such auctions a success, and the positive energy generated by this year’s event creates a buzz to keep “Celebrate Washington Wine” a ‘must-attend’ benenfit.  The crowd this year was a mix of both ‘new’ and  ‘old’ attendees, and it’s always fun to chat with Christopher Chan, the auction reader, (who is the Executive Director of the Seattle Wine Awards, as well as the Director of Wine and Spirits at the Rainier Club). Chan did an awesome job, and played so well off auctioneer Jeff Randall, who is so good at coaxing just a few more dollars out of the pocketbooks of bidders.  WSU President Elson Floyd and his wife, Carmento, are always gracious. Also, a number of WSU Board of Regents were there, including attorney Rafael Stone,and his wife, Donna. (Stone and I discovered we share a birthday). Another couple at our table, Greg Porter and his wife, Lauren, found out we all went to WSU during the same years, where Porter played Cougar football.  I also visited with Washington Wine Commisson Executive Director Robin Pollard, as well as Greg and Stacy Lill, of DeLille Cellars.  Dan Bernardo, WSU Dean of the College of Agriculture, Human and Natural Resource Sciences, and his wife Pam, as well as Seattle Times publisher Frank Blethen, and his wife, Charlene, also were in attendance, as were a number of other notable bidders out to have some fun, and recognize our state’s wine industry.
Money raised (update) — I’m now learning that this was the biggest auction to date, and that more than $240,000 was raised on Saturday night.  I do know that in nine years, Celebrate Washington Wine has raised well over a million dollars for the WSU Viticulture and Enology program. And if you’re interested in attending next year — the date has already been set for January 22nd, 2011!
Please feel free to click on the photos below for the full image. Just a few of the wonderful friends and colleagues attending Celebrate Washington Wine. 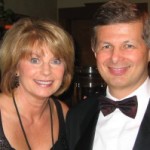 Margo:
Great blog! Thanks for your continued support of the WSU V&E program and your invaluable service as our MC. Go Cougs!

Thanks, Dan. Always great to see you and Pam, and I’m so pleased for the auction’s success this year!

Great piece! Your readers might be interested in the video we produced for the auction, which is now available online at http://bit.ly/daHEfK.

Thanks Brian. Nice job! Thanks for pointing it out.