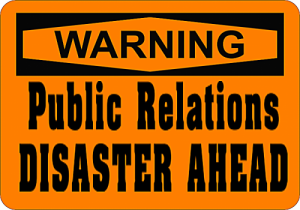 Operating in ‘crisis communications’ mode is never fun. If only there were such clear warning signs posted like the one seen here so we could avoid negative press. It’s best to have a plan in place for your company or organization so you aren’t scrambling if a situation arises that needs to be corrected or finessed.

These observations serve as reminders on doing what you can to avert disaster in the first place, and what to do if a situation escalates.

I know they might sound cliché, but in this era of social media, you can’t be too careful. Good intentions can be misconstrued, and in PR, you want to get the situation turned around as quickly as you can. Again, have a plan in place BEFORE disaster strikes, and make sure your top level people are prepared to act.

1. My rule for social media – never post or tweet anything you wouldn’t want to see as a headline in a newspaper, such as the Seattle Times. This also goes for emails. We can’t always assume that people will keep them private.

2. Emails – a couple of things here. It’s like the reading of your rights – ‘anything you say, can and will be used against you.’ I tend to keep emails short and to the point. Again – consider what could happen if it was made public. If there’s any sensitive info, it’s better to meet face to face, or have a phone conversation – that isn’t recorded. Too many things can be misinterpreted via email. Don’t give people more ammunition to use against you.

3. People hear and read what they want to believe. I can tell you that on several occasions when I anchored the news, viewers would call the TV station and say – ‘ hey, I heard you say this.’ Even though I could pull up the script and read to them verbatim what it said, they would insist it was something different. People have their own filters and take in information differently according to their experiences.

4. There are more than 2 sides to a story – generally 3 or 4, depending on how many people or groups are involved.

5. You can’t make everyone happy. Even though we try to foresee the worst that can happen, not everyone is always going to come out a winner. Do your best.

6. People will ‘pile on’ – especially true on social media. If there’s something negative that starts to go viral, people often jump in to comment even though they may not have a full understanding of the situation. They WILL express their opinion. (See the recent #AskEmmert bit on Twitter).

7. If you make a mistake, admit it and move on. Sometimes, this is your best option to nip a situation in the bud as quickly as you can.

8. Tell the truth. Don’t try to spin the message. Be as transparent as you can. Your credibility as a person and organization does count.

9. Keep your stakeholders apprised of the situation. You want your key people – whether that’s employees or board members to know what’s happening. Often times, they can be ambassadors for you, and help communicate the message you want communicated.

10. Know when to talk to the media. It can be so tempting to want to tell your side of the story, and sometimes it’s necessary to do so. In many situations, a written statement will suffice. Doing a media interview can exacerbate the situation, and keep it ‘front and center’ that much longer. An experienced PR person who knows how news (and the news cycle) works, can help you make this decision.

Let me know what your experience has been. Have you averted a crisis, or managed to keep a PR disaster from getting worse? Share what worked. I’d love to hear your story.