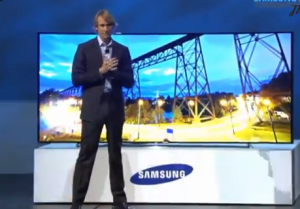 Everyone knows speaking in public can be hard — even for movie director Michael Bay.  Bay was presenting at the Consumer Electronic Show in Las Vegas for Samsung when he lost his place on the teleprompter, tried to wing it, and then walked offstage. Super embarrassing. Especially when you’re a well-known movie director. Click here to see the video.

I’ve worked in front of crowds for years, both ‘live’ and on camera, and as many of my friends and former colleagues in TV news will attest, things go wrong! Often. The trick is to recover quickly and gracefully enough that you don’t leave your crowd hanging, or worse yet, find yourself walking off the stage. (Absolutely not recommended).

So as someone who now helps people with presentation skills, here are my top 3 tips to avoid a public speaking meltdown.

Who are you speaking to? Why are you there? What do they care about? These are often questions you want to know the answer to before you ever begin. In Bay’s case, he was presenting a new product, a new 150-inch curved TV, with Samsung America executive Joe Stinziano, and their presentation had obviously been scripted out. They knew their audience, and had this part right. After all, they’re at the CES show, and this was primarily a ‘friendly’ crowd who was waiting to be ‘wowed’ by the new technology.

Bay and Stinziano likely had compelling content, showing how the cool new product works. But we’ll never know how it might have been presented since Bay ended up leaving. This is a case of knowing your material. I can’t tell you how many times as a news reporter, I was out in the ‘field’ and the story didn’t roll, or there were problems with audio, and I found myself on camera explaining the story without the help of people’s soundbites or video. If Bay had maybe been more familiar with the material, he and Stinziano might have been able to recover more smoothly, and get back on script. They did briefly try to ‘wing it’ without success.

If this happens to you – you lose your place, or your train of thought — here are a couple of options. Pause for a moment, and then say “I’m so passionate about this, I sometimes get ahead of myself” and then find your place on your notes, or the prompter. If the prompter malfunctions completely, you might want to say “I want to make sure I have this next, important point exactly right” and read from your notes. Make sure you have physical notes or notecards handy.

I was emceeing a big fundraiser in San Jose, California one night as a young news anchor. There were about 800 people in the ballroom, and luckily, I had my notes with me. I made the mistake, however, of leaving them on the podium when a couple of people came up to accept awards. When they were done, my notes (with the entire evening’s program) were missing! I didn’t have the option of walking off the stage. Instead, I made a joke about my notes walking off stage and, as I didn’t sing or dance, asked that everyone check their pockets, and had a musician play the theme from Jeopardy. My notes were quickly found and returned. I thought I was going to die of embarrassment. I now NEVER leave my notes on the podium, ever.

The late Steve Jobs was known as a great presenter. Not only did he live by the ‘Rule of 3’ and have three main points he made in his talks, he practiced! He practiced  his cadence, his pauses, his gestures, and became one of the best business presenters in recent times. People often think great presenters are born, not made. I’m here to tell you that you can become a great (or at least very good) presenter if you practice. Try it in front of a mirror. Try it in front of a friend. Listen to their feedback. But practice.

Most people start out being uncomfortable talking in front of a large audience. But it does get easier the more you do it. Let me know how you recover if your talk goes wrong. I’m happy to share great suggestions.

What a great piece, Margo.