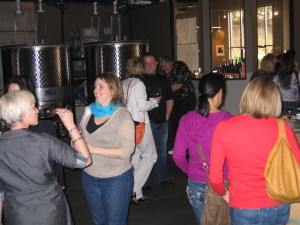 Tis the Season. Local wineries are now releasing their 2007 vintages, and my husband and I are always happy to meet new people. So when we were invited to visit Efestē for their release day in Woodinville, we immediately put it on the calendar. Efestē (think F-S-T — the first initials of the last names of the owners, Daniel and Helen Ferelli,  Patrick  Smith, and Kevin and Angela Taylor) has a relatively new facility in an industrial area of Woodinville, where not only the wine is made, but the warehouse lends itself nicely to events and entertaining with a kitchen, bar and wide open area in the winery. 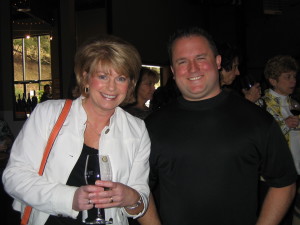 The Wines. One of our winery volunteer friends, Jeff, introduced us to Patrick Smith, who was kind enough to make sure we got a taste of the four wines being poured this day. I am in no way a ‘wine expert’ — merely an enthusiastic wine drinker who enjoys trying various well-made Washington wines. We started with the 2009 Feral Sauvignon Blanc — described as a ‘crisp white with a taste of citrus and minerals, and a lingering finish.’ It lived up to its description, but Sauv Blanc has never been my favorite. (Yeah, I admit, I like Chardonnay). Then we moved on to the 2009 Evergreen — a riesling that you could describe as ‘off-dry’ — certainly not sweet.  This had a nice touch to it, and once I learned winemaker Brennon Leighton had helped make the Chateau Ste. Michelle ‘Eroica’ when he worked there, I could taste a similar style. (The grapes for the 2009 Evergreen came from the Evergreen Vineyard near George, Washington, and the 2007 Eroica also included grapes from the Evergreen vineyard). This riesling we decided, would pair nicely with Thai food.  Next up was the 2007 Final Final, a blend of  56% Cabernet, 42% Syrah, and with 2% Mourvedre to add a hint of spice. It’s smooth with tastes of black plum and clove, and is a mid-priced blend at $25 that’s very easy to drink. Lastly, we tried the 2007 Big Papa — a 100% Cabernet Sauvignon made with grapes from mature Red Mountain vines (including 31% from Kiona, 31% Weinbau, 25% Klipsun and 13% Sagemoor vineyards). Brennan is a big believer in not manipulating the wine, but using great grapes to give his wines big, bold, complex flavors. This one we’ll lay down in the cellar for a few years to allow it to age.  One woman tasting the ‘Big Papa’ next to me could only describe it as, “Yumm-oh.”

In the photo left, above: Tasters enjoy the four wines being poured. In the photo to the right:  Efestē owner Patrick Smith shows me around the tasting room. In the photo below: winemaker Brennan Leighton explains the complexities of the 2007 Big Papa. 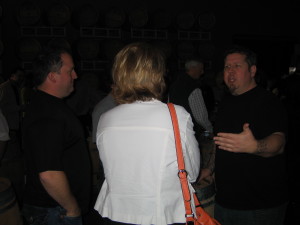 The People. Patrick was a great host, who introduced us to the other owners, Daniel and Helen Ferelli. Daniel and Helen shared some of the ‘back story’ of how the winery came into being, as well as how some of the wines are named. Daniel, who’s Italian, had been making wine in his garage, sharing his passion for wine with his son-in-law Kevin. Daniel and Patrick met through a business connection. When they all got together for dinner — it wasn’t long before a new project was born.  They talked with local winemakers, took a trip to Australia to talk to winemakers there, (in fact, the winery’s symbol is Aborigine for ‘kangaroo’) and they came back with a philosophy of ‘not taking yourself too seriously, enjoy your family, friends and anyone else that would like to join you in a glass of wine, breaking of bread and a good laugh.’  Patrick told me that’s what he likes best about the wine business — “people are happy. What’s not to like?” About this time, Daniel grabbed a bottle of their ‘Ceidleigh’ — a syrah made entirely from Red Mountain grapes. Ceidleigh (pronounced KAY-lee) was named after a gal in Australia who was their server at a dinner there. (Helen frankly wanted to know why a wine wasn’t named after her, and she’s getting a namesake soon). Back to the wine. The Ceidleigh turned out to be my favorite. The 2006 Ceidleigh was named #36 of the Top 100 wines by Wine Spectator last year, and garnered 93 points from the same magazine. (Helen told me it was HER favorite, even before it won the acclaim).

The Winemaker. We’d previously met Brennan Leighton at another wine tasting, and enjoyed talking with him. Now we had some time to not only find out his philosophy about winemaking, but we learned that my husband and I lived in Monterey, California at the same time Brennan lived around Monterey Bay in Santa Cruz,where he grew up. All of us love the California Central Coast, and had fun sharing our favorite spots from Half Moon Bay, to Big Sur, to Santa Barbara. Brennan has a very distinct philosophy when it comes to making wine. He says he doesn’t want to be ‘heavy-handed,’ and believes in using great grapes to let the ‘wine make itself.’  He likes the ‘process’ of winemaking, although he admits there’s somewhat of a ‘disconnect’ at times. On this release day, people were drinking the 2007’s, while he had just bottled the 2008’s and was thinking about the 2009’s. Brennan says he’s like the ‘intuitiveness’ of making wine, the creativity as well as the science, and if you throw in the farming knowledge (since every growing season is different), it’s always changing. He’s a likable guy who makes wines you’ll like, and if you haven’t yet tried Efestē wines, you can check them out further by visiting their website at www.efeste.com. 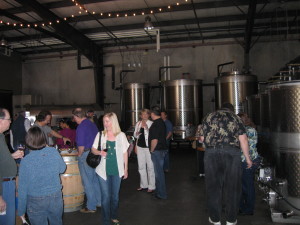