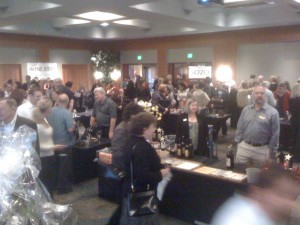 Cab Classic to help hungry. About 300 people gathered at Bell Harbor for the First (what’s hoped to become annual) Cab Classic to benefit Rotary First Harvest. RFH is one of those unsung heroes in our state, working diligently behind the scenes to get extra food from the fields and orchards, trucked to food banks, and into the hands of hungry families. They move an incredible amount of food — just under 13 million pounds of produce last year, or nearly a full semi-truckload of produce every day last year, that would otherwise go to waste.

Call in the Cabernet. I got involved through a connection with RFH’s Development Director Jacki Lorenz, who asked me to emcee their program and paddle raise. The lure? About 40 Washington wineries, pouring their Cabernets, and Cab-based blends. And did people turn out to sip, swirl, and nibble for a good cause. David LeClaire of Seattle Uncorked, who’s getting ready to open a huge ‘Wine World Warehouse’ in December, pulled together the list of wineries.

My favorites. So I started with some recommendations from a well-placed source, and started selectively moving around the room. (Side note here: Wine tasting with a future slot in front of a live microphone can be a dangerous combination, so I very carefully paced myself, pouring out more good wine than I tasted). That being said, however, the J. Bookwalter 2007 Conflict, a Cab-based blend with Cab Franc, Malbec, and some Petit Verdot, was delicious. As was the Gard 2007 Cabernet Sauvignon, (a Robert Smasne wine) as well as a Smasne Cellars 2006 Cab. (I had interviewed Robert during the Seattle Wine Awards back in June, and learned then he has a hand in about 25 different wineries here). The Otis Kenyon 2006 Cab, and the Nicholas Cole blend were both tasty and smooth as well. And I know that I am leaving out several other wines that I sipped and tasted that deserve mention.

In all, a nice success on a beautiful night. The gorgeous Seattle night over the water certainly didn’t hurt attendance, and it was beautiful watching the sun set over the Olympics. I will check in to learn how much money was raised for this well-deserving group, and report back as soon as the numbers are in. For a first-time event, I’d call it a success, not only for raising awareness of RFH and the work they do, but raising the profile of some fine Washington wineries, and I’m hoping they’ll be back next year.