Later update!!! Cougars beat Oregon on Friel Court in Pullman, 77-63. Sloppy passes by the Cougs in the first quarter, but Reggie Moore kept them in the game, and ended up with 15 points, while Klay Thompson knocked in 16! What a great day for sports fans!!

Update!!!!! What an amazing game and even more amazing WIN!! Love it, and Matt Hasselbeck had a fabulous game. Talk about a gunslinger. Brandon Stokley — stud. Marshawn Lynch — unstoppable. Props to Pete Carroll and the rest of his coaching staff.  We noticed that a lot of announcers didn’t know what to say — so unprepared were they for a Seahawks win.  But the best thing — I yelled the entire game, and no one told me to shut up. They yelled as loud as I did. Onto the next round. Bring it on!

Go Seahawks! A great day for sports fans here in the Northwest. Against what seemed like improbable odds, the Seahawks have landed in the first round of the playoffs, against no less than the Super Bowl champs from last year — the New Orleans Saints. That being said, we do have a chance, and you can bet the 12th Man will be out in full voice and colorful gear! I love the way Seattle rallies when our teams, usually underdogs, go on to do amazing things. (I covered the 1995 Mariners race with all the fans, and the palpable excitement and way the city pulled together behind their team is something I’ll never forget). Yes, admittedly, we can be fair-weather fans, but that’s a topic for another day. 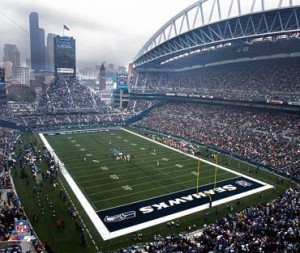 If you’re headed to the game, you know the drill! I will be watching from the warmth of my family room, yelling nearly as loud as anyone in the stadium until everyone else in the family tells me to ‘Quiet down!’ I’m hoping for a good game, much like last week, where the Hawks don’t make a lot of turnovers, and play callers call an efficient game. I hope Matt Hasselbeck has a great game! He’s had a tough season, and I hope he comes out with his arm rockin’! Mike Williams — get ready.

And the Seahawks game isn’t the only game I’ll be watching today. I’m a big college basketball fan and will be rooting for the Cougars later tonight against Oregon on Friel Court. At a meeting with my Cougar friends yesterday — we agreed it’s a great day to be a sports fan!