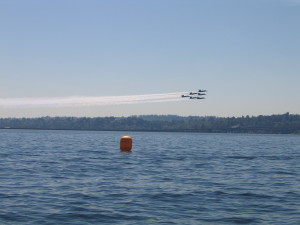 The Sound of Freedom. I love hearing the roar of the Blue Angels! Just the thought of all that speed and power gets my adrenaline going. When I worked in my very first reporting job in Redding, California — they have a huge airshow every summer. They would take only 2 reporters up that year, and the guy I worked with pulled rank and decided he would go. So he did. If only I could describe the many shades of green as he shakily climbed down out of that jet. The Navy Lt. in charge of public relations tried everything he could to get me into a jet for a media ride, but the Navy only had so much fuel to use, and wouldn’t allocate any more. I was out of luck.

Until 20 years later. When I moved to KIRO, I was asked if I would like to go up with the Blues during Seafair! Give me a tenth of a second to say yes! You have to have a ‘physical’ to get clearance. All along, I’m thinking, first, that these guys are about 15 years younger than me and in much better shape, and secondly, that I get carsick riding in the backseat of a car. Hmmm… how would I do in an F-18 fighter jet doing aerobatics?

Day of the Flight. I went to Boeing Field ready for my big day. Bill Wixey, of Q-13, and Kaci Aitchison, then from the Bob Rivers radio show, were the other two media picks that year. We went through the talk of what to do if the plane goes down (you’re basically on your own), put on our jumpsuits (canvas coveralls is all — no G-suits here), and I got ready to go first. You’re strapped in within an inch of your life. The pilot asks if you’re ready. I said, “As ready as I’ll ever be,” and he flipped the switch to fire up the engines. Nothing. Tried again. Nothing. They finally figured out, the jet wasn’t going to start until they got the mechanic in, and that would take about 2 hours. I went to work at the station instead and said I’d come back tomorrow.

Next day. The next day, Bill had already gone up and become very familiar with his barf bag. Kaci went up and said she didn’t throw up, but did pass out. I didn’t even know that could happen. Then it was my turn. We took off from Boeing Field (launched is what it felt like) on a crystal clear day, shot 9,000 feet up into the sky and we were on our way out by Long Beach. What the pilot didn’t tell me is that the G’s would force my head down — giving me whiplash right off the bat. Ouch. It took 9 minutes to fly out to the Pacific, where all of a sudden we were doing loops, rolls, inverting (flying upside down), and generally having a blast. Then we did the vertical roll. That’s where they fly straight up and spin around. I was ‘hooking’ as hard as I could to keep the oxygen to my brain, but that’s when I passed out! Just for a few seconds. Then I ‘came to’ realizing, oh yeah, I was flying in a fighter jet, and I was right back in the game. We pulled 7.3 G’s, which seemed like a lot at the time. My pilot wanted to keep flying, but I told him I had to go to work (I still had at least 3 newscasts to anchor that day in addition to putting together a story on my flight!) So we did one last simulated carrier landing (another 7.3 G’s), then touched down at Boeing Field, and I made it through without using my barf bag! Was it worth waiting 20 years? You bet.