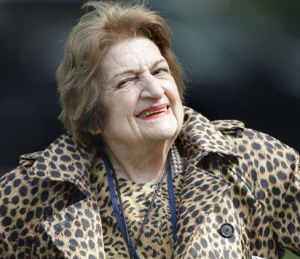 I’m saddened to hear of the passing of Helen Thomas. She was a pioneer for women journalists and not afraid to speak her mind. You might recall seeing her sitting at the White House press conferences, and she asked the tough questions. It was also her role to close the press conferences, with her trademark “Thank you, Mr. President.”

I had the pleasure of meeting Helen Thomas at the WSU Murrow Symposium in 2009. Ms. Thomas, along with one of my all-time favorites, Bob Schieffer, was honored as a Edward R. Murrow Award recipient. Lynn Espinoza and I were sitting at breakfast at a Pullman hotel before the day’s events, and the tables were full. Lynn and I had two extra seats, and when a woman approached us and asked if she could join us, we said “sure.” It was the friend and assistant of Helen Thomas, and both of them joined us for breakfast. Needless to say, Lynn and I were thrilled! While we wanted to be respectful, we couldn’t resist asking her about the Presidents she had covered. She shared stories, and wasn’t shy. We loved it.

President Barack Obama hadn’t been in office long, and we asked her what she thought about his Presidency so far. I recall her saying, “He’s not bold enough.” She believed with all the goodwill he had coming into office, he needed to make stronger statements and not be tentative. Ms. Thomas didn’t hesitate to share her opinions, but only when asked during our breakfast. It was a memorable experience for two female reporters who admired the women pioneers who have gone before us, and paved the way!

Below is the wire service story of Ms. Thomas’ death.

Helen Thomas used her seat in the front row of history to grill nine presidents — often to their discomfort — and wasn’t shy about sharing her opinions.

WASHINGTON — Helen Thomas, the irrepressible White House correspondent who used her seat in the front row of history to grill nine presidents and was not shy about sharing her opinions, died Saturday. She was 92.

Thomas, who died at her apartment in Washington, had been ill for a long time, and in and out of the hospital before coming home Thursday, according to a friend, Muriel Dobbin.

Thomas made her name as a bulldog for United Press International in the great wire-service rivalries of old, and as a pioneer for women in journalism.

She was persistent to the point of badgering. One White House press secretary described her questioning as “torture” — and he was one of her fans.

Her refusal to conceal her strong opinions, even when posing questions to a president, and her public hostility toward Israel, caused discomfort among colleagues.

In 2010, that tendency finally ended a career which had started in 1943 and made her one of the best known journalists in Washington. On a videotape circulated on the Internet, she said Israelis should “get out of Palestine” and “go home” to Germany, Poland or the United States. The remark brought down widespread condemnation and she ended her career.

In January 2011, she became a columnist for a free weekly paper in a Washington suburb, months after the controversy forced her from her previous post.

In her long career, she was indelibly associated with the ritual ending White House news conferences. She was often the one to deliver the closing line: “Thank you, Mister President” — four polite words that belied a fierce competitive streak.

Her disdain for White House secrecy and dodging spanned five decades, back to President John F. Kennedy. Her freedom to voice her peppery opinions as a speaker and a Hearst columnist came late in her career.

The Bush administration marginalized her, clearly peeved with a journalist who had challenged President George W. Bush to his face on the Iraq war and declared him the worst president in history.

After she quit UPI in 2000 — by then an outsized figure in a shrunken organization — her influence waned.

Thomas was accustomed to getting under the skin of presidents, if not to the cold shoulder.

“If you want to be loved,” she said years earlier, “go into something else.”

There was a lighter mood in August 2009, on her 89th birthday, when President Barack Obama popped into in the White House briefing room unannounced. He led the roomful of reporters in singing “Happy Birthday to You” and gave her cupcakes. As it happened, it was the president’s birthday too, his 48th.

Thomas was at the forefront of women’s achievements in journalism. She was one of the first female reporters to break out of the White House “women’s beat” — the soft stories about presidents’ kids, wives, their tea parties and their hairdos — and cover the hard news on an equal footing with men.

She became the first female White House bureau chief for a wire service when UPI named her to the position in 1974. She was also the first female officer at the National Press Club, where women had once been barred as members.

It’s tough to be a pioneer at anything and the fact that she was able to become the first serious woman journalist speaks volumes about her tenacity.

I’ll never forget that morning. She had some great stories, and no shortage of opinions! Helen and Bob Schieffer were just so approachable and personable. Great for students to hear their stories – especially Schieffer’s from the JFK assassination.