Help for Victims of Violent Crime

Families and Friends of Violent Crime Victims and Missing Persons marked a significant milestone today — 35 years of service to the victims of violent crime in our state! It was a packed ballroom at the Tulalip Resort to turn out to support this group, that often flies under the radar until violence touches you or someone you know.  Executive Director Jenny Wieland Ward spoke eloquently about how Families and Friends literally saved her life in 1992 when her teenage daughter Amy Ragan was murdered. And the stories didn’t stop there. 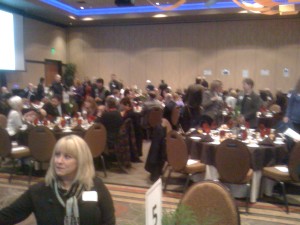 Families and Friends Founders. Linda Lowrance and Lola Linstad traveled from out of state to attend this morning’s breakfast, and remark on how they started FNFVCP after Lola’s daughter disappeared. Both went on to be spokeswoman and forces for good in this state, working with law enforcement through the Charles Campbell case, as well as with families of the women murdered by the Green River Killer. Families and Friends worked tirelessly for victim’s rights, becoming a voice in Olympia when no one else was listening to those who lives had been turned upside down by violence.

Special guests. Chuck and Judy Cox of Puyallup, who’s daughter Susan Cox Powell has been missing from her home in Utah since last December, attended this morning’s breakfast. They are courageous parents, going through an ordeal that I can only imagine, and never wish on anyone. They reached out to FNFVCV, and I hope their case is solved. They are gracious people, put in a position of untold pain and frustration.

“There is no closure.” Beth Adams, who works now with Domestic Violence Victim Advocate cases for the Tukwila Police Department told the story of her sister-in-law’s murder, and what it did to the family. As Beth’s husband Ray told me after the breakfast, “There is no closure. People’s lives are forever changed.” And often in ways that no one can foretell. There is nothing easy about it when violence hits home.

Thank you. I want to thank Famlies and Friends and Jenny Wieland Ward for asking me to participate, and for all the people who took time out of their busy schedules to attend, and make donations to a worthwhile organization. Your funding today provides help for your neighbors, people you may never meet, but who will be helped by your generosity in the future. 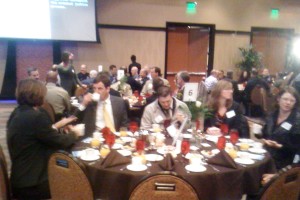