It started with a text from my husband that read ‘someone said the KOMO helicopter just crashed near Seattle Center and cars are on fire.’ I immediately checked online, saw that it was true, and turned on KOMO radio, then the TV. My worst fears were confirmed – there were two fatalities. One of them was the pilot, Gary Pfitzner. The other was Bill Strothman, a longtime KOMO photographer who was now working as a contractor flying in Air 4. 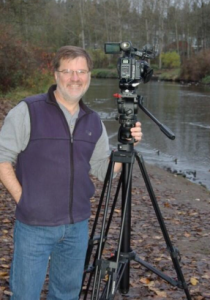 When I joined KOMO in 1993 as an anchor and reporter, I often flew in Air 4 (even though it wasn’t the same helicopter that crashed today). One of my best memories is when the station sent the chopper to Blaine to pick me up a couple of days after I started, so I could make a studio rehearsal on time. Roger Fox was the pilot. We flew on a perfectly clear night, and could see the lights of Victoria, B.C. in the distance. Upon arriving in Seattle, the lights of the city were spectacular, and to land next to the Space Needle on the roof of the KOMO building was something I will never forget. I didn’t worry about something going wrong. It was thrilling to take flight.

I often worked with Bill Strothman. He was simply one of the best. As a photographer, as a colleague, and a person. KOMO news photographers take great pride in their craft, often winning the NPPA Station of the Year award, and Bill played a major role in those awards. Bill knew his craft inside and out. I learned so much from him about storytelling, when to let the story ‘breathe’ and when the perfect ‘shot’ could impart information far better than I could ever say it.

Air 4 goes down outside Fisher Plaza near Seattle’s Space Needle.

The partnership between reporter and photographer is unique. And it IS a partnership. The reporter may be in front of the camera, but with many of the photographers I’ve worked with over the years, it’s the people behind the camera who can really make a story sing. I spent many hours in the Explorer with Bill, on our way to stories all over Western Washington, in good weather and in some of the worst. Not only do you learn about each others’ families and share personal stories, but you learn how someone works under pressure, in often stressful situations and how they treat people. I have the utmost respect for Bill — for the person he was, and the way he worked with people. Even though I haven’t worked with Bill in years, our paths would still cross on occasion – at Fisher Plaza, or even at Costco while shopping.

My heart goes out to the Strothman family – Nora, son Dan (also a KOMO photographer), and daughter Heidi. And my heart also goes out to the KOMO family. They have done an amazing job reporting the news of this crash under very difficult circumstances. While it’s hard to cover these types of stories at any time, when you have personal friends and colleagues involved, I can only imagine the sadness and difficulty. I admire their composure and abilities. Truly.

And while I hope the NTSB finds answers to this tragic crash quickly, I know that we’ve lost two people who hold a special place in the world of TV news, and they won’t be forgotten.

Thank you Doug! I know the two of you and Dan worked together on so many projects. Bill was just one of the special ones.

youtube.com/c/MargoMyers206
Do NOT follow this link or you will be banned from the site! wpDiscuz
2
0
Would love your thoughts, please comment.x
()
x
| Reply