Update: Family and friends turned out in full force last Friday for memorial services for Phil Sullivan. About 500 people gathered at St. Luke’s in Shoreline to remember a man whose mission in life was helping others. As Father Madigan said, Phil didn’t say, “When I’m done working, I’m going to volunteer and help others. No, he made it part of his life, and did it with a smile and good grace (and an irreverent sense of humor). We went on to the Edmonds Yacht Club to hear from Phil’s close friends — and pay tribute to his humor. His wife, Rose and son, Damien were surrounded by those who loved Phil.

And perhaps the biggest announcement came from Senior Services of Snohomish County Board President Dave Earling, who told the crowd that the new senior services center will be named the Philip E. Sullivan Center for Healthy Aging — a fitting tribute for a man who did so much to make that organization into what it is today. 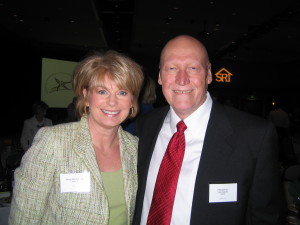 Such a good guy. A good friend of mine lost his battle with lymphona this week. Phil Sullivan was the Executive Director of Senior Services of Snohomish County. His incredible talent was bringing amazing people together to work towards the betterment of seniors, homeless teens, and a number of other groups or causes in which he was involved.

He had already been undergoing treatment when this photo was taken at the SSSC luncheon last May, but he was thrilled to be there with all the supporters in the room for Senior Services. It’s been a rollercoaster for the last couple of months, and in the end, it was a battle his body just couldn’t win.

Funeral services next Friday. Services to remember Phil are being held next Friday, with a celebration of his life being held afterwards, and I’m sure there were will be numerous stories of his sense of humor and good fun, his generosity with others, and his loyalty to longtime friends. Phil Sullivan will certainly be missed!