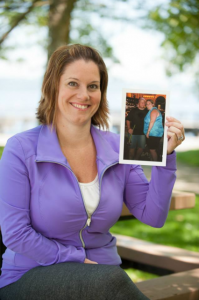 Darcy Bockman-Wright returns to college at Brandman University for her college degree.

As part of my PR duties for Brandman University, I get to interview amazing students, faculty members and others, including Darcy, and share their stories. She has had a tough road, but is moving forward with her dreams and inspiring others with her story. Margo

Inspiration comes in many forms, and for Darcy Bockman-Wright, her inspiration is daughter, Megan, who is about to begin high school. Bockman-Wright has lost 170 pounds, and this September, returns to college to finish her Bachelor’s degree at Brandman University.

“My goal is to graduate from college with my Bachelor’s degree in Organizational Leadership before my daughter graduates from high school,” says Bockman-Wright. “And, I didn’t want to be that mom whose weight embarrasses my kids.”

Bockman-Wright’s story is one of hardship and perseverance, but with clear goals now in her reach. She moved to Germany after her mother died in a car crash, and after living with her father and stepmother for several months, went to live in an all girls’ home at age 12. “It’s like Germany’s version of foster care, but it was amazing,” she says. “I was the first American in an all girls’ home, and I got to travel and see a lot of Europe with girls who came from all around the world.”

Bockman-Wright joined the U.S. Army in Frankfurt in 1993, serving until 2002 as an eye specialist, a combat medic and a truck driver. Finally leaving a relationship she describes as “abusive,” she ended up in Seattle at the YMCA Women’s Shelter with her young daughter, starting over her life from “scratch.” She found a job at a local bank, and “not learning my lesson the first time,” found herself in another bad relationship. She left when she realized that wasn’t the example she wanted to set for her daughter. Again on her own as a single parent, Bockman-Wright took a job with an eye doctor, and joined a church. She didn’t date for more than a year.

When she met the man who would eventually become her husband, Bockman-Wright says she weighed about 200 pounds. She became pregnant with her son, Brennan, and her weight ballooned to 280. And then it got worse. Back and knee injuries kept her from exercising, and her weight reached a high of 345 pounds. “I wanted to be happy,” says Bockman-Wright. “But every day I would look in the mirror and see a reflection of what I couldn’t do, and I felt like a failure.”

Last year, Bockman-Wright, who currently works at Madigan Army Medical Center in Ophthalmology at Joint Base Lewis McChord, decided to take back control of her weight and her life. In September, she had gastric bypass surgery. Even though she says it hasn’t been easy, with the support of her husband and children, she’s now down to 180 pounds. “Since I’ve had the surgery, I walk with my head held high,” says Bockman-Wright.

With the dramatic weight loss comes more confidence, and the drive to finish her college degree. “College is empowering me even more,” says Bockman-Wright. “And I don’t think I’ll stop at my Bachelor’s. Long-term, I know I can finish my Master’s in Organizational Leadership. I want to be a leader on base, whether it’s at Madigan, the VA or a unit attached to JBLM.”

Bockman-Wright says she’s been through a lot in her life, but she wouldn’t change a thing. “I went through all the things in my life to get where I am,” she says. “Don’t let anyone tell you ‘you can’t,’ because you can.”

With daughter Megan starting high school and Bockman-Wright going back to college, she says she feels as if they’re both starting new chapters in their lives. In addition to being a role model for her daughter, she hopes her story will prove to be inspirational to others. “If I can change one person’s mind about losing weight or going to school, and if I can inspire just one person to get off the couch and take back control of their life, then it’s all worthwhile.”