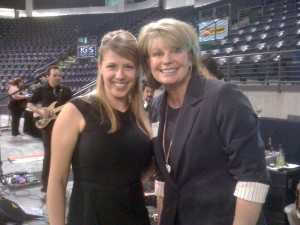 UPDATE: I just talked to Director of Development Elaine Purchase who tells me that in addition to holding the largest luncheon, PICC also had a stellar day for contributions, exceeding $100,000. This is wonderful news for PICC, Barb, Elaine and especially the babies who need this specialized care! Thank you to everyone to donated.

This year’s luncheon was the largest ever — as 750 people turned out at the Showare Center to celebrate with PICC and hear the compelling story of actress Jodie Sweetin, from the TV show ‘Full House.’ Jodie told about recently seeing PICC on the show ‘The Doctors,’ and offering her help to Executive Director Barbara Drennen. Barb asked her to speak, and speak she did — telling of her own experience as a drug-addicted baby born to a mother who used drugs, a father who was killed in a prison riot, being adopted by relatives, and then going on to perform in TV commercials, and ‘Full House.’ She told of starting drinking at age 13 as the show ended and she entered high school. How the transition was beyond difficult. How she started cutting, using harder and harder drugs, and had to seek help a number of times. Jodie is now the mother of a 3 year old daughter, a 9 month old daughter, and is clean and sober! Her story was inspiring, and I wish her the best in the future!

PICC has wonderful support from our state lawmakers, including Congressman Dave Reichert, a grandfather to two of PICC’s graduates, Lt. Governor Brad Owen, State Sen. Margarita Prentice, State Sen. Karen Keiser, Rep. Dave Upthegrove, Rep. Mark Hargrove, Rep. Tina Orwall, and others — many of whom were in attendance and are dedicated champions of PICC!

PICC is celebrating helping more than 2,600 babies over its 20 years with specialized care, saving the state of Washington more than $80 million! Supporters have raised $500,00 to build a new center — a cross between a home and a hospital, to serve these littlest drug victims. Special recognition goes to Executive Director (and founder) Barb Drennen, who works tirelessly in support of these babies, and to Development Director Elaine Purchase, who puts on a fabulous program year after year. Their dedication is remarkable!

Congratulations to PICC for continuing the hard work they, their volunteers, their doctors and nurses all do to care for these babies!