The Power of Role Models 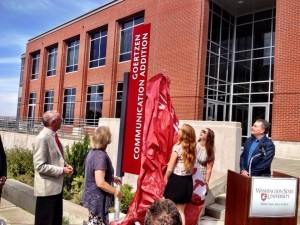 Have you ever considered the power of role models? People whom you may, or may not know personally, who have the ability to influence your actions?

Role models are different than mentors. A mentor is someone who is an experienced adviser and supporter who advises and guides a younger, less experienced person. There’s often an ongoing relationship between the two. A role model, meanwhile, can be any “person who serves as an example, whose behavior is emulated by others.” We might have a number of role models who influence and inspire us throughout our lives.

I was struck by the importance of role models this past weekend at the dedication ceremony of the Kathi Goertzen Communication Addition, a building on the Washington State University campus in Pullman, honoring the late Seattle broadcaster who died last year following a long battle with brain tumors. One of the speakers at the ceremony was a young news anchor, Kelly Koopmans, who is currently the morning weekend anchor at KOMO TV, the same station where Kathi worked. Kelly says she watched Kathi on the news as she grew up, and was inspired by Kathi to go into broadcasting, attended the same university, and eventually landed at Kathi’s station in Seattle, KOMO TV. This talented young woman looked to Kathi as inspiration for her career, but it turns out, the two never met. Kelly was simply inspired by Kathi!

In the interest of full disclosure, I was part of the committee that led the effort to rename the building after Kathi. Having a positive role model who could inspire the very best in not just Communication students, but every student on the WSU campus, was a major part of our decision. Even as I worked with Kathi at KOMO, she was one of MY role models.

My questions for you — who are your role models? How have they inspired you? You might also be interested in this Huffington Post article on role models of famous people. Are you a role model for others?

As always, let me know your thoughts.