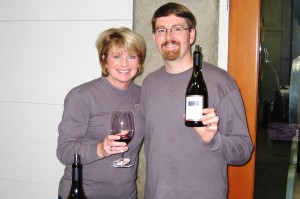 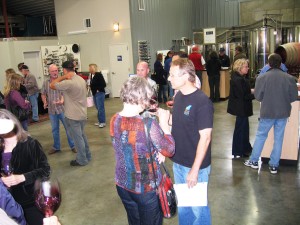 Pouring La Serenne. I did get to pour wine this day, the La Serenne, which I thoroughly enjoy doing. I first poured with Robin, a longtime volunteer, as well as with Louis, one of Bob’s interns, who is already very knowledgeable and loves the blending of wine. It seemed we had many first time visitors to Betz this day, and they wanted to know more about Bob’s philosophy on the wines. The La Serenne is from the Boushey Vineyard in Yakima Valley, a cooler growing site, and 2008 turned out to be a cool growing season (much like this year in 2010). That meant grapesthat were about 15% smaller than 2007, and a dense, more concentrated flavor, as well as a dark purple color, rich with taste. Even being decanted twice, the La Serenne was a little ‘closed’ but that didn’t stop many tasters, who came back for a second sip after tasting the other wines. The Syrahs were showcased to show the difference in macro-climates, the various vineyards, and changes in terroir — which all contribute to the particular flavors and notes you’ll taste in the wine.

Wine mysteries. One of the most fun things Bob does (after the cleanup and while we’re grabbing a bite to eat) is pass around a bottle of mystery wine in a paper bag. Us volunteers try to figure out what it is — New World, Old World, North or South hemisphere, which varietal, even down to what winery and vintage. It’s an amazing way to learn about wine, what holds up over time, the various price points, and what works. Some in the group are very, very knowledgable (I’m not one of them), and it’s fun to hear the lively discussion about each mystery wine. Of course, that’s why we like volunteering at Betz — not only do we work with great owners, friendly people, and interested customers, but we learn more about an industry that is growing in Washington State by leaps and bounds every year!