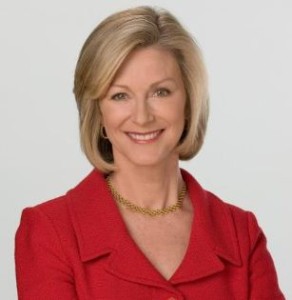 Remembering Kathi Goertzen…. I was so saddened to get the news of Kathi’s passing this afternoon during a phone call from my sister while we visited an elderly friend in Yakima. We were on our way home from celebrating my mom’s birthday! I worked with Kathi at KOMO for nearly 12 years, and have called her my friend for nearly 20 years. Not only were we colleagues at KOMO, but we were both WSU Cougars, and shared a passion for our alma mater, working on various projects and emceeing many of the same events during that time.

In my eyes, Kathi was ‘grace’ personified while fighting these nasty brain tumors. I still remember when she was first diagnosed. She was having trouble hearing. She said the doctor told her it was either hearing loss of some kind, or a brain tumor. She laughed when she said this,  knowing it couldn’t possibly be a brain tumor. Tests proved her wrong. All of us in the newsroom were stunned. And so her battle began. For 14 years, Kathi battled her disease with the courage and grace that I, and so many others, admired in her.

Kathi and I worked ‘opposite’ shifts a lot of the time. She worked weeknight newscasts, while I reported and anchored weekends with Eric Slocum. And then when I moved to mornings at KOMO, our paths crossed less, but I always enjoyed the ‘specials’ we did together, such as the telethon for Children’s Hospital. We’d chat while putting on our makeup in the ladies’ room around the corner from the studio, check our outfits, and spray on that final spritz of hairspray. Then we’d head into the studio to raise money for Children’s, visit with the many children and their families who came on TV with us, and have some fun!

Kathi was so well known in her hometown of Seattle. If I had a dollar for every time someone called me “Kathi,” I’d be wealthy beyond my dreams. We both worked for KOMO, we both had short, blondish hair at the time, we had the WSU connection, and people knew us from TV. Even when I moved to KIRO, and anchored nightly newscasts with Steve Raible, people still called me “Kathi.” I never minded. Who wouldn’t want to be mistaken for such a talented and respected newscaster? In more recent years, I’ve had more people ask me “How’s Kathi doing?” I always answered as honestly as I could, depending on my last conversation with her. I should mention, however, I just had someone call me “Kathi” last weekend at Seafair. I’ll miss that.

I retired from TV news three years ago, and now do PR for certain clients. Just a year ago, when I was working with Ryan Leaf as he also recovered from a brain tumor and promoted his new book, Kathi did the interview for KOMO. She had a unique perspective as the interviewer — having also gone to WSU, covered Ryan at the Rose Bowl in 1998 (which meant I filled in for her on the anchor desk here in Seattle), as well as having fought her brain tumors, like Ryan. She did a great job with the story. Her voice was weakened, but the passion for her craft shone through. (See the story here: http://www.komonews.com/news/local/130406623.html. Ryan is now back in rehab fighting his own painkiller addiction battles).

Most recently, Kathi was part of our team working to honor WSU broadcasting professor Glenn Johnson as he phases into retirement, with our campaign to raise money for a professorship in his name. It’s called Another Cougar First Down, and my last email to Kathi was to let her know the campaign was successfully launched. (Please visit www.anothercougarfirstdown.com to learn more).

I have learned much from Kathi. She was a shining example of the best of broadcasters, and more importantly, the best of people. At the WSU Gala last fall, Kathi emceed with Glenn Johnson. She told the crowd that she had lost a lot physically while fighting this tumor. But what she had gained in love more than made up for it. And that’s one of my biggest lessons from Kathi:  Love your friends and family. Let them know it. Because in the end, that time is a gift.