The loss of Washington State University President Elson Floyd is a difficult one, not just for Cougar nation, but I believe, for higher education and for our state. Much has been written this past week of his leadership, including this article in the Seattle Times, and the impact he had on our university and the expansion of many WSU programs and campuses. I saw firsthand the positive impact Dr. Floyd had on people, and I consider him a true leader. I initially met Dr. Floyd at the Celebration of Washington Wines at Chateau Ste. Michelle, an auction and dinner to support WSU’s Viticulture and Enology program before it was folded into the Auction of Washington Wines. He always remembered people’s names, took time to connect with them around a personal detail, and gave credit to others for their hard work.

Two memories stand out in my friendship with Elson. During the first, I was attending a WSU Foundation gala with other members of the Board of Trustees. I hadn’t been there five minutes and was talking with a group of friends, when President Floyd made a beeline to our group, looked me straight in the eye, and said in that deep, smooth voice of his, “Margo, I want you to head up a committee to decide the best way to honor Kathi Goertzen on campus.” Kathi, the longtime KOMO news anchor and graduate of the WSU Murrow School of Communication, had recently passed after her heroic battle with a brain tumor. I immediately answered that I would be “honored” to put together such a committee to do that for Kathi. (I worked at KOMO for nearly 12 years as an anchor and reporter, and knew the impact Kathi had on the community). Dr. Floyd was there offering guidance every step of the way, from helping determine the make-up of the committee (to which I am still indebted for the time and effort they put in on the project), to allowing us to bounce ideas off of him, often via text message, to helping us forge an alliance with the Murrow faculty and Foundation to name the former CADD (Communication Addition) building the Kathi Goertzen Communication Addition, now Goertzen Hall. “It is fitting that we honor Kathi’s devotion to preparing the next generation of journalists with the rededication of a building in which so many future journalists will learn the trade,” said University President Elson S. Floyd at the time. “In this way, we recognize the unique perseverance, hard work and dedication that Kathi demonstrated throughout her professional career and in her personal life.” 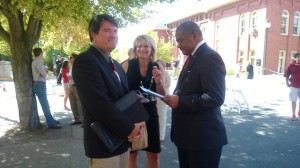 The second instance was at a Foundation Board of Trustees meeting in Pullman about a year later. We had a couple of speakers address the Trustees, and in a warm room after lunch, I looked around the tables and noticed some people starting to nod off, no longer paying attention to the speaker behind the podium. That speaker wrapped up, and then Elson picked up the mic. Immediately, the energy in the room changed. President Floyd entered the crowd, walking through the tables to lay out details of various programs, including an update on the $1 billion Capital Campaign for WSU. Everyone paid attention.

When I think of ‘executive presence,’ I think of Elson Floyd. A commanding presence physically, with a melodious voice, exuding confidence, with a smile that lit up the room. You couldn’t help smile yourself when he turned his smile on you. That day, he had a ‘shout out’ for various trustees who had gone the extra mile for WSU, recognizing them with a word and a smile, and maybe placing his hand on their shoulder for emphasis. Every eye in the room followed him from table to table. No hiding behind a podium for President Floyd. These were his people, some of the greatest supporters of the university who recognized his visionary leadership of what a great university should and could be.

There are other memories, such as the unveiling of the new Martin Stadium and touring the new President’s Suite with Elson and noting the smallest details down to the stitching on the backs of the seats. Or trading stories during a fundraiser for a local political leader.

I am deeply saddened by the loss of President Floyd. I am however, grateful that I had the opportunity to interact with him, learn from him, and watch him transform WSU into Washington’s state university. His presence and leadership will be greatly missed, and I will treasure my memories of President Floyd.

This is a great piece! Thank you for sharing your thoughts. Leaders like Floyd are so few and far between – he is so deserving of our appreciation.