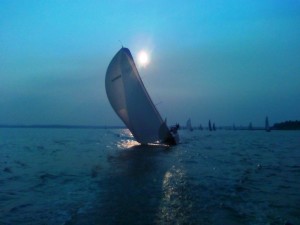 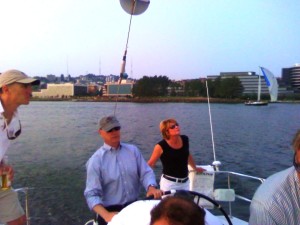 A Good Night for Sailing. Not only was it still warm, but a breeze kicked up just in time for the Thursday night races on Elliott Bay. When I mentioned to my friend Scott Anderson of CSR Marine that I’d only been on a sailboat once in my life, (and that was in Oklahoma — an entirely different story) he invited me out for the races. I’m a powerboater, not a sailor, but I love being out on the water so I said yes!

At left, I’m watching the sails next to the skipper, Lou, as Chris, (in the tan hat) calls out orders.

Artemis is a 53 foot sailboat owned by Scott’s friend Lou. They raced it to Maui last summer during the Transpac 2009, so they know what they’re doing. I’m the first to admit, I know very little about sailing, so I asked Lou what I needed to know to stay out of the way. The safest place was back by the helm where I wouldn’t get into any trouble, get hit by the boom, get lines wrapped around my ankles, or somehow end up overboard. And it was a great place to be. Chris was the tactician, calling out orders to the 8-10 people who were actually manning the sails. They timed the start of the race perfectly, jumping out to a quick lead on the way to the first ‘mark’ (a giant yellow buoy) over by the grain terminal on Seattle’s waterfront.

Scrambling around turns out to be a big part of sailing. Depending on whether you’re tacking or jibing, we had about 25 people scrambling from one side of the boat to the other. We got inside and around the first mark, headed for the next mark near the big freighter anchored in Elliott Bay, turned around it with Lou doing a skillful job at the helm. We rounded that mark and headed for the finish line — finishing the race in about 33 minutes.

Tied up at the dock and time for hot dogs. Once tied up at the dock, it was time to stow the sails and head to shore for hot dogs and beer. The rest of the boats came in, and it was fun to see all the people dressed as pirates! Since this is Seafair, most years the Navy sailors come over to the marina to be taken out on the boats for a night of sailing. But this year, it appears a couple of the ships didn’t make it in, so we didn’t have the Navy guests. That didn’t stop a number of the ‘regualars’ who are out there on Thursdays from donning costumes. What fun to visit with the other sailors (including John and Lisa from my dock), the others on our boat, and all the rest of the Thursday night sailors, who enjoyed a beautiful early evening race!