Santa Barbara and the weather. When I arrived in Santa Barbara with my friend Nancy, our first thoughts were — Gorgeous blue skies, beautiful green hills, and rather chilly air. The sun was shining, but it certainly wasn’t overly hot. (In fact, I think it was warmer in Seattle on Friday). That being said — we also had palm trees, beach, a pool, marina, beach volleyball and people to visit.

Eat your way through town. While Seattle has many fine restaurants, it’s always fun to try something new. So we picked up my son, headed to Montecito to Lucky’s for a fabulous steak dinner. And it was great! Steak cooked perfectly, and served with bearnaise, bourbon and peppercorn sauces. Our waiter was nice (while still being kind of stiff), and while I tried my best to persuade him that Washington red wines are just as good as California’s offerings, he still seemed skeptical. He did, however, steer us to a fine Cabernet, and brought me an extra glass by the same winery, Babcock, but a different vineyard so I could note the difference. Last time, my friend noticed Jimmy Buffett at the next table. Not this time.

Biltmore for drinks, and even better people watching. Another night, we went to the Four Seasons Biltmore for cocktails, and mainly to people watch. It didn’t disappoint. The hotel is beautiful — Spanish/Mediterranean style with lovely fabrics on the furniture and drapes, good service and plenty of fancy cars being driven off (to a nearby parking lot) by the valets. The funny thing was, here we were in this beautiful bar, people dressed in nice clothes, a big fire burning in the fireplace (because the fog had moved in) and the TV was turned to wrestling. Really. It seemed a little out of place, and even another patron requested a different channel, but nothing changed until the live music began. Then they turned it off. And no, Oprah did not make an appearance.

Trip up into the hills. So while I’m reviewing eating/drinking establishments, let me recommend the Cold Springs Tavern on a sunny day. It’s up over the hills on San Marcos Pass, and while it’s a favorite of the Harley Davidson crowd now, it used to be a stagecoach stop. Here’s what it says on its website:

So the guy in the photo below with me was minding the BBQ, cooking tri-tip for killer tri-tip sandwiches. Totally delicious for $8.75. He said he would cook 100 tri-tips on this Saturday. I was suitably impressed, until he said, “That’s nothing. On Sunday’s, I cook close to 700!!” Wow. It’s THE place to go for the weekend motorcycle crowd (among others) and they all turn out for the tri-tip. 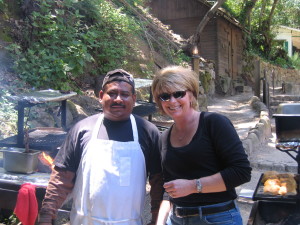 Yes, we did get exercise. So by this time, we were feeling the need for a little exercise. We hiked through the Botanical Garden up above the Santa Barbara Mission, and rented ‘cruisers’ to bike the beach from one end to the other. It was fine if you had the breeze behind you, but work peddling into the wind. The good news — it did keep you from working up a sweat. The impressionist art exhibit at the Santa Barbara Museum was good (I liked the Monet’s, but enjoyed the Alfred Sisley’s on display even more). I won’t bore you with the time spent by the pool, or shopping the boutiques on State Street, but will say, in spite of the morning marine layer moving in but burning off by noon, it was a great trip to Santa Barbara.

My family history in Santa Barbara goes back to the time when Cold Springs Tavern was a stage coach stop, but for me I remember as a kid driving by the tavern when the Harley riders were a bit more rowdy then they are today. It wasn’t the kind of place we stopped at back then. Things have certainly changed, and clearly for the better. Kathy and I rode our motorcycle by Cold Springs Tavern a couple years ago and stopped for a visit. History oozes out of every old board and carefully placed rock. At the same moment you… Read more »

It was fun, since I’d driven by dozens of times when I lived in San Luis Obispo, but had never stopped before now.

There are a bunch of good wineries in Santa Ynez valley outside of Santa Barbara & near Temecula (Riverside County). Cruiser Motorcycles