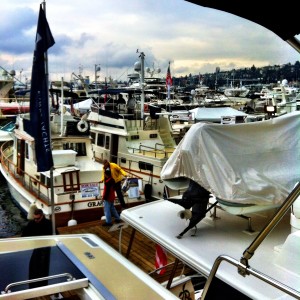 Seattle Boat Show 2014 is in the books, with the final show wrapping up a day early because the Seattle Seahawks are in the Super Bowl. (And you know where everyone will be on that day)!

This year, we attended only the floating boat show at the Lake Union location. This gave us a chance to see a variety of boats – both new and used, and see what new features we like.

We checked out an Ocean Alexander 58′ Pilothouse — a boat that’s been kept up beautifully. I love the electronics, including the camera off the stern. Large screens show great detail. The rest of the yacht was simply gorgeous and well laid out. Ocean Alexander is the broker on this one. 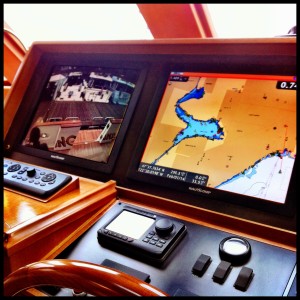 We also viewed a brand new 2014 Grand Banks EU 54. Talk about loaded! This boat had it all, from bow and stern thrusters, to stabilizers, to a fabulously laid out and easily accessible engine room. (see photo below).

One of the things I like about Grand Banks yachts, you have the option of running them around 9 knots to save fuel, but if there is weather coming and you need to get somewhere quickly, you can push this particular boat up to 20 knots. Seattle’s Grand Banks Northwest has several new boats in.

Everywhere we looked, there were yachts! From 120′ to 35′ at the docks. Many were used, but nearly all looked impeccably kept. Price points appear to be moving north again and  more sales seem to be taking place than in the past 3 to 5 years. As usual, I like to pick out the features I want in about a 50′ boat — two captain chairs, stairs – not a ladder – that lead to the flybridge, an open salon and well equipped galley. One thing I noticed on more boats (or at least the ones we viewed) – washer and dryer. Love that! 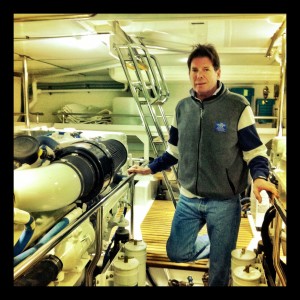 Of course, we stopped by to see our friends at Crow’s Nest Yachts. They have a number of boats — new inventory — for you to check out.

At some point, I want to go out for a cruise, and try a boat with Zeus pods or IPS, and see how truly maneuverable they really are. I’ll keep you posted, and let you know how that goes.