Attendance is Up: Things appear to be looking up for this year’s Seattle Boat Show, being held at both South Lake Union and Qwest Field, with show attendance already up 24% over last year after a couple of days. Blue skies and warm temperatures on Tuesday brought out crowds to tour the number of yachts docked at South Lake Union, in what can only be described as a ‘buyer’s market.’  Yes, there are big yachts north of 50′ that are going for well over a million dollars, and there are also vessels, such as a Northern Marine 64′ extended cruising yacht, selling for $1.4 million ‘under’ it’s replacement cost (according to the builders’ information), at $2.2 million. I also noticed several yachts listed as ‘foreclosure’ sales or ‘liquidation’ sales, and that’s not something you see very often at the Boat Show. I should add here that I have no formal association with the Seattle Boat Show, other than being a boat owner and longtime attendee, with a client who’s exhibiting at Qwest Field. 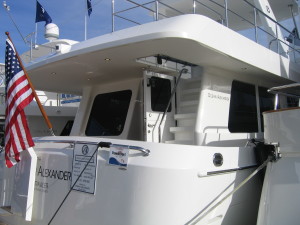 My “Must Haves:” What I like best about boat shows are the easy comparisons you can make between manufacturers, styles, and cool new features being offered. Some day, I would like a bigger boat (which boat owner doesn’t?), and this is a great way to find what you like and don’t like on your vessel.  Here are some of my ‘must-haves.’ (And these are only my observations — not endorsements or complaints of any kind since all the brokers were very generous answering my many questions).

1. As beautiful as some of the yachts are, I’m not comfortable with only a single engine. It has to have twin screws, as much for maneuverability, as well as extra peace of mind if something does go wrong with an engine. (Been there).

2. It has to go faster than 8 knots. That may be okay if you have all the time in the world, but if you don’t, you need to be able to outrun bad weather, fight a current, or just get there. Even considering the fuel savings with a single engine, trawler-type vessel, I’m just more comfortable having the option as one guy put it, ‘having extra power in my back pocket.’

3. I like deck access on both sides of the boat. Some boat-builders have gone to larger salons, giving you access to one side (for fendering and lines) only from above, or from just one side of the boat.  That’s not for me. I want to be able to walk around, and easily get to lines and fenders without running up stairs or ladders.

4. Here in the Pacific Northwest, with our often wet weather, a hardtop on the flybridge is a plus, or at the very least, a bimini that’s strong enough that you can enclose the flybridge. Even in the summertime, I like a little coverage overhead from the sun.

5. An extended cockpit works well, for the same reason as #4. If you want sunshine, there’s always the bow.

6. Molded stairs leading to the flybridge. Ladders just seem too dangerous in rough water and make it difficult to carry things up and down.

7. Inside, two staterooms and at least one head with an enclosed shower are the minimum. Ideally, my dream boat would have two staterooms with two separate heads in case you want to have another couple onboard, and allow for privacy.

Again, these are things I look for in a larger boat. Not everyone will agree with me, (including my husband) and everyone has different priorities about what kind of boat makes them happy.

Cool, new features: All that being said, there are some very cool features on boats now that I would like to try out on the water. Looking at the Grand Banks 41′ EU with the Zeus pods for easy manuevering , as well as the ‘Skyhook’ feature to hold the boat in place — it all looks and sounds good in theory, but how does the boat truly handle in rough seas, or in wind at the dock? The salesman assured me it’s as good as advertised, but having never experienced it, I want to try it on the water. And while the salon is roomy with good visibility on this sized boat and includes extra storage under the floor, what boat selling for more than $900,000 doesn’t already have a flat panel TV in the salon? There’s a space where one will fit, but it wasn’t installed. (The boat does, however, come with dishes).

I also checked out the 54′ Ocean Alexander Trawler Extended Cruiser (as seen in the photo above). It meets a lot of my specifications, but at almost $1.5 million, is a little pricey for my pocketbook. It’s another vessel that I would like to try on the water. It has what OA calls an “S” bow — or bulbous bow. And it also has two helm seats, both below and on the flybridge. That I like, since with only one seat, someone gets left with a ‘lesser view’ of that’s going on. 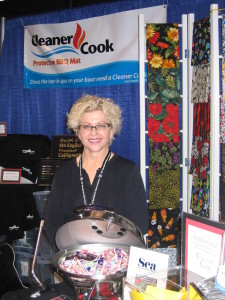 Qwest Field venue: And then it was on to Qwest Field, to check on client Recia Weigelt, of Cleaner Cook. She manufactures a protective canvas mat designed to go under your boat’s barbeque to keep your boat clean. She’s having a very good show to date, and she’s  also now selling “James Gang Barbeque Sauce” in a variety of flavors, offering tasting samples to visitors. A number of people stopped by while I was there (including vendors from nearby booths who I think just like to taste the ‘sauce’).

Return to Lake Union: Then it was back to South Lake Union to meet with Sea Magazine’s Sue Hicks. Sue knows nearly everyone in the boating business in the Northwest, and we hadn’t had a chance to catch up recently. One of the things I like about Sue is that with her many friends, colleagues, and clients, she’s not shy about making sure everyone knows (or at least gets to meet) everyone else.  We visited with several brokers from Canada about upcoming events (since their boat show was cancelled because of the Olympics). In fact, one tried to sell me on a 50′ Feretti, whose owner wants to bump up to a larger boat given the great deals in this market, but I told him, it’s going to have to wait until next year.