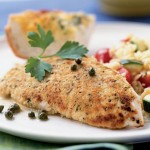 Given this has been a snow week, and I’ve been laboring over my computer as much as I can — I also need to take a break every once in awhile, and actually cook dinner. My husband is a better cook than I am, but since he’s been slaving away in the weather and coming home exhausted, it’s fallen to me to ‘step up my game.’

I keep favorite recipes in the cupboard by the stove, ready to pull out at a moment’s notice if I need inspiration. (Of course, my mother-in-law ‘gifts’ us with a cookbook every Christmas, made up of recipes from friends and family, but that’s a blog for another day). As I was thumbing through my stack of recipes today, looking for the Chicken Scallopine recipe from Sunset Magazine, it occurred to me how many friends have touched our lives  simply by sharing their favorite foods.

There’s the Goat Cheese and Asparagus Strata from either Debbie Parietti or Julie Boehm, made for several years running when we hosted the Mother’s Brunch for moms from St. Anne’s on the first day of school every year.

Or the Spaghetti with Bacon and Rosemary from 2006 from the Rutherford Hill wine club, to be served with the 2003 Syrah! And then I find the program from the March of Dimes Gourmet Gala from Monterey, California in the early 1990’s when my cooking partner was James Brolin. Another year I cooked with a race car driver, Jon Beekhuis. Whoever my partner was, I always had a running competition with Judge Jonathan Price and the guy who owned Pebble Beach at the time.

And there’s the recipe from Mel’s kitchen for Individual Cream Cheese Cakes. When I worked at KSBW in Salinas, California, my co-anchor, Joe Glover, producer Sheila Riley, writer Michelle Rossi and I all took turns cooking dinner each night for the rest of our crew. Friday nights, we ordered out. We always got some interesting concoctions from Joe, depending on how many beers went into the chef on Sunday night. Sheila was a fabulous cook, and I imagine still is, and so was Michelle. You could usually find us on Thursday or Friday nights after our 11pm newscast (our sports guy, Dennis Lehnen, was a regular, too) at the Brass Rail or a bar we called ‘The Silver Bullet’ to play Liar’s Dice. (Yes, Liar’s Dice, and it was tons of fun). One of our regular players was Mel. Mel was a businessman in Salinas with the bass pipes of a radio announcer’s voice, and Mel wanted to contribute to our dinner group, so he offered his recipe. It was only a year or two later that we spoke at his funeral.

One of my favorite recipes actually comes from Emeril LaGasse’s Thanksgiving Contest from Good Morning America in 2000. It’s a recipe for Pumpkin Praline Pie with bourbon whipped cream. My mom and I made it one year, and it looked like a ‘flour bomb’ had gone off in the kitchen. We had a great time making the pies, getting the crust just right, carefully building the layers of pumpkin and praline, and when we gave my dad a taste of the whipped cream, he simply looked at us and asked, “Who needs pie?”

There’s the Grilled shrimp with Mango Salsa, the Captain’s Chicken from Rachael Ray (given to me by another TV producer), and the secret recipe for Chocolate Chip Cookies from the Ritz-Carlton, Kapalua — all recipes collected over the last 20+ years from vacations, events, and special people. So keep in mind the next time you share a recipe with friends — you’re sharing memories of good times when the dish was made.

And my Chicken Scallopine recipe? Yes, it was on the bottom of the pile. We’ll have it tonight.