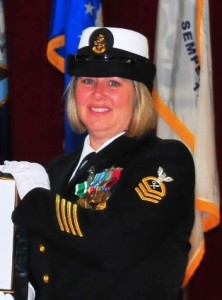 I wanted to share this profile about Brandman University graduate Jennifer Marzocca who lives on Whidbey Island, and attends Brandman’s Whidbey Island campus! She has a great dream, and it’s education that will  help get her there. I’m hoping her story will inspire other Navy veterans to pursue their dreams in retirement, be in higher education or another track. Full disclosure: I’m working with Brandman to help get out the word about their programs here in Washington state. Margo Myers, Principal, Margo Myers Communications

Jennifer Marzocca has a vision. After retiring from the U.S. Navy as an intelligence specialist, this single mother of three is now pursuing her education so that she can launch a program designed to help teenagers transition into adult life. “I have 19 and 17 year old sons, and a six year old daughter,” said Marzocca. “I want to create a program to help parents understand adolescence, how to inspire their children to grow without smothering them, and to provide tools for teenagers to give them confidence as they become adults.”

Marzocca grew up in Southern California, and moved to Whidbey Island after high school. She looks at her own teenage years for inspiration. “I was a horrible student and didn’t have a great attitude,” said Marzocca. “But I knew I had more in me, and was destined to do something with my life.”

Marzocca found her calling in the Navy, where she served for 20 years. She worked as an intelligence specialist, working with Navy SEAL teams, and serving as an instructor for SEAL support personnel. Most of the work she did is classified, but Marzocca describes it as an “intense and dynamic environment, with interesting, rewarding and challenging” assignments.

Marzocca says it was reaching the rank of Chief Petty Officer that caused her to start thinking differently about herself and leadership. “We have these defining moments when we grow,” said Marzocca. “The leadership I experienced in my Navy group was amazing, and it wasn’t the typical military authoritarian experience.”

Becoming a leader in the Navy prompted Marzocca to look at her life differently upon retiring. She knew she wanted to go back to school full-time, and she wanted a program that allowed her to also work part-time and raise her family. Marzocca says she started planning about a year before leaving the Navy, researching different universities. “I didn’t want something strictly online,” said Marzocca. “I wanted it to be interactive, in class, and I planned to approach my education as a job.” She found her match at Chapman, now Brandman University, at its Whidbey Island campus. “I called and talked to Todd McClain, who went above and beyond to make sure I was on track,” she said. “From the first phone call, I was made to feel I was the most important person they were helping.”

Marzocca has pursued her education with a passion for learning, first earning her Bachelor’s degree in Social Science. She graduates in May with her Master’s degree in Organizational Leadership. Going to school full-time, raising three children and working part-time is a full load, but Marzocca manages. “The classes are challenging, but if you listen to the professors and keep up to speed, it’s doable,” she said.

In fact, Marzocca is now applying for her Doctorate degree, and hopes to begin that program in the fall. She looks at the advanced degree as an opportunity to network and refine the skills she already has. “I never said retiring from the Navy was the end. There’s still work to be done, and I’m getting closer to focusing my goals.”

Right now, Marzocca’s focus is on completing her education and going on to help teens transition to become confident adults. “Through my education, I’ve become more comfortable with decision making, and being a transformational leader,” said Marzocca. It’s a personal transformation that will help Marzocca realize her dream.