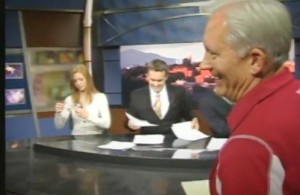 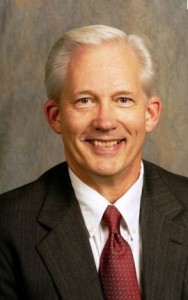 Why we love this guy. Glenn Johnson is a broadcast professor at Washington State University in the Murrow College of Communications. He’s the Voice of the Cougars at all of their home football and basketball games. (Can you say, “And that’s another Cougar first down!!!!) And, he’s also the Mayor of the city of Pullman. Those are enough jobs for a lifetime, but to pull them off simultaneously, and to do each of them well is nothing short of incredible.

Why we really love this guy. Glenn has been a professor for 30+ years at WSU, and is single-handedly responsible for more broadcasters working in the business than anyone else I know. What makes him special is his willingness to share his real-life broadcast experience with students. It’s not just sitting in a class listening to a lecture. It’s ripping wire copy, writing under deadline, getting out there and figuring out how to white balance the video camera, or how to get rid of the “Ohmigod — I look like a deer in the headlights” look off a new student-anchor’s face the first time they go on camera. It’s not easy, but it makes students learn the right way to do broadcast journalism, and teaches them what it means to uphold the Murrow legacy with integrity and a strong work-ethic.

How former students are honoring him. A number of us Communications alums who’ve worked in broadcasting got together in 2009 to launch the Glenn A. Johnson Professorship Excellence Fund that provides Glenn with a little extra money to buy equipment for broadcast students, or maybe fund getting back the AP wire service. It also honors Glenn because he made such a difference in our lives. Some day, hopefully a day that’s a long way off, Glenn will retire, and when he does, we want WSU to be able to recruit the next broadcast professor who’s able to mentor and influence students in the same way. The fund is just one way to do that, and yes, you can help. Our target goal is $300,000 and we’re already a sixth of the way there.

Rockin’ video tribute. Eric Johnson from KOMO 4 News put together this awesome tribute from former students (you’ll recognize some of them). Take a look and listen here: http://www.youtube.com/watch?v=RzH7NUzpNM0&feature=email. We hope it inspires you to go to the website link below and make a donation! It’s easy and fast, and you get to honor someone who’s had a huge impact on the Cougar nation. You don’t have to be a broadcasting student, just a fan of all Glenn does for WSU!! (Now you know who that voice over the PA system belongs to!)

Thanks for supporting our efforts! And watch this space for some new, upcoming developments that are going to be really fun for all Cougar fans.